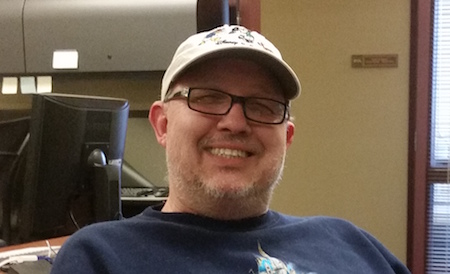 Kenny: Welcome to our second installment of NCSA Crush Wednesday. Today I am interviewing Alex. So Alex, how are you doing?

K: Good, thank you. To jump right into things, how long have you been working at NCSA?

A: I do desktop support mainly, so system administration.

K: So you say you’ve been working here since ’98, what were your impressions of NCSA when you first got here?

A: Great place to work. A lot better than my previous jobs.

K: Well speaking of your previous jobs, what did you do before here?

A: Right before here I worked at the airport. I worked as the parts manager for aviation that’s out there.

K: So you worked for the airport. Was that O’Hare, Midway, Was it in Illinois?

K: So what brought you here? What was your interest in the company?

A: I had a friend who worked here. We worked together at Best Buy, and he got a job here, and then the person who was working at the Beckman building, because we used we used to be over there at the time was pregnant, so they needed to find a replacement for her while she was out on leave.

K: And this sort of turned into a more permanent position?

A: Yeah, well it was full time anyway, because they were going to have somebody anyway, but that spurred on the need for it right then.

K: Is the person that you worked at the Best Buy with, are they still here?

A: No, they left probably four years ago.

K: Oh ok. So you came here in ’98, what were your expectations then? What were you thinking of the position for the company (NCSA)?

A: I knew absolutely nothing about it, other than I knew the university (U of I) and I’d always wanted to work for the university because they have great benefits. Basically where I was working I was a salaried position at the airport and I was like the go to guy for everything there. So I was working 60 or 70 hours a week, going in on the weekends.

A: Just trying to get it done! Since I was the only guy at the airport, I got really good at doing a bunch of things at the same time. So the first couple weeks that I started here, my boss would hand me a sheet of things to do. And so the first day I handed it back to her and said, “I’m done,” and she said, “Those were supposed to last the week!” (I laugh). And I was like, “What?” and she’s like, “How’d you get them done so fast?”, and I said, “Well I did them all at the same time.” And she’s like, “Just concentrate at doing one thing at a time,” and I was like, “…Ok.” (Both of us laugh). So I don’t think she was expecting (that).

K: So an easy transition for you, to say the least.

A: Well, throttling down took me awhile, but yes. yes.

K: So did you know that this then was the 30th anniversary, before I just told you?

K: Are you excited for it, what are expectations for it? I know I’ve been saying expectations a lot, but that’s kind of the theme of these things (interviews).

A: Well honestly since I’ve been here 17 or so years, so, you know when we had the 20th (anniversary), then I was like, “Yay, we did Mosaic!” I didn’t have anything to do with it, it was already gone by the time I was here, so you know it was kind of like, I remember being at Parkland (Community College) when the guy switched all the browsers in the lab to Mosaic. So I knew when it came out, and I used it, so being part of the place where that it came from was cool, but like I said, it was already gone by the time I got here, so I don’t have a lot of history with what they usually bring up as our biggest deal, you know what we’re known for.

K: Yeah, understood. So what are some of your highlights for you time here at NCSA?

K: Ok, that’s cool! To close the interview, so we’ve been here for 30 years, what do you foresee in the next 30 years for NCSA?

A: 30 years from now, I would assume it’d all be run by terminators! (Both of us laugh).

K: I knew you were going to say something like that!

A: I mean, they’ll clearly figure out a way to replace us by then.

A: Well, they’re getting pretty close, so somewhere along the line it’s going to happen.

A: Yeah, hopefully they’re friendly Terminators. (Both of us laugh).

K: Well thank you for your time.