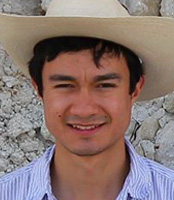 Kenny: Hello and welcome to our third installment of the Blue Waters Fellows interviews. Today I am talking with Josh. Hi Josh, how are you doing?

Josh: Good, how are you doing Kenny?

K: I am doing well today, thank you. So Josh can you please tell us what some of your research is about?

J: Yeah, sure. Well I come from an electrical engineering background, but currently I mostly have changed gears a little bit and I am a geologist at this point. So I’m working on volcanos, but mainly using that electrical engineering background to develop sensors, and our understanding of electrical processes that happen during volcanic eruptions, specifically volcanic lightening. Often times we have a big eruption, you see these beautiful electric displays in the volcanic plume or volcanic cloud, and so we’re trying to figure out what these discharges can tell us about the eruption. You know they produce a whole bunch of electrical and magnetic signals that you can measure from the distance, so it’s a way to probe volcanic dynamics, understand eruption dynamics, remotely and safely. So we’re trying to understand the coupling between fluid dynamics of the eruption, and electrical dynamics. Doing this in a couple of manners, we’re doing the field research, so observation of volcanic lightening and electrification processes. We’re also doing experimental work, and recently, which is part of this Blue Waters initiative, is doing numerical or simulations for these goals.

K: Interesting! So where was the transition from, you said you were electrical engineering, correct?

K: Ok, so where’s the transition between electrical engineering and geology?

J: Well mostly it’s censor development, so in some way we have to capture these electrical signals that are produced during eruptions, and one way we do that is through electronics, or developing of censors that then we can go put on volcanos and capture electrical data during an eruption. So that’s sort of the interface between the two fields; using the background I had as an electrical engineer, and applying it to geophysical systems, namely volcanos.

K: Alright, very cool! So are you out in the field a lot then?

J: Yeah, quite a bit. Maybe once or twice a year, maybe three times. But mostly about twice a year.

K: Very cool! So do you feel like there is any added pressure, or that there are higher expectations for success now that you’re a part of Blue Waters at all?

J: Well I think it’s really cool tool, so I don’t know if the pressure’s really coming from outside, but I think it’s not often that you get a chance to use one of the most powerful computers on Earth to dissolve problems like this. So I think it’d be kind of foolish to waste; I think the pressure’s coming more internally. I’m trying to use these resources as best I can.

K: Then what are your own personal expectations with your research, now that you’re a part of Blue Waters? Have they changed at all?

J: Yeah, I think so. I think it’s a cool problem to solve during a Ph.D. program, but I think being part of Blue Waters adds another dimension to that, or basically having access to these computational tools adds a different dimension in the sense that we can look at problems that we probably couldn’t tackle from an experimental or field side. And what do I mean by this? Well lightening is a macroscale process, meaning it happens on a scale from meters to kilometers, but the charging process, or the electrification processes have been at the microscale, or the nanoscale. And so what Blue Waters allows us to do is to really look at very fine details that we couldn’t do with resources of a level to us, for example, in the laboratory or in the field. So it does add that dimension. So when you talk about expectations, I think we can get a lot clearer answer, or much better insight about these electrification processes with a system like Blue Waters.

K: Thank you. So would you say that there are, not necessarily new avenues, but avenues that weren’t necessarily available to you at the time then?

J: I think both a little bit. I think they are new, in the sense that nobody has really done these. I mean the electrification processes in general are very poorly understood. So we’re learning a lot in the lab, and it’s great, but I think having Blue Waters just adds, it’s sort of like the cherry on top of the pie. It just adds this great other pool that we can try to constrain electrification processes in a much better way.

K: Thank you very much, that’s very interesting, and I hope your research continues to do well.

J: Thank you very much.

K: And thank you for taking the time with me today!

J: Sure thing, sure thing!