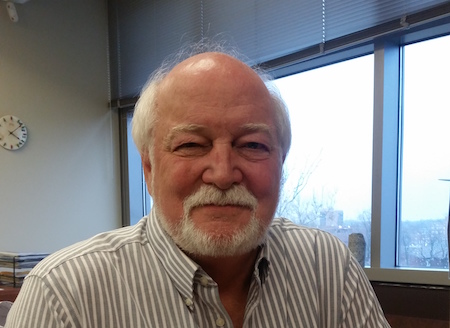 Kenny: Hello everyone, and thank you for reading our fourth installment of NCSA Crush Wednesday. Today I am with the Executive Director of NCSA, Danny Powell. Hi Danny, how are you doing?

K: Thank you for joining me today.

K: 15th year on the dot, cool! And what do you do here exactly, as the Executive Director?

D: (Laughs) That’s a tough one, but basically my job is to manage the enterprise of NCSA. I come from a more business-type background, so I kind of manage it from a business perspective, and the director is more the visionary person. My job is to help him try to implement his vision within NCSA.

K: So you’ve been here for 15 years, like you said, what were your impressions when you first came here (NCSA)?

D: Well I worked at Rice University, and I worked there for 15 years, and I loved it there I thought that I would retire there, it was a great place, family was all there, but NCSA was always one of those places where they changed the world. And whenever they approached me, and said they were interested in talking to me about this position, it was like an opportunity to go somewhere, where you really had an opportunity to change the world; to make a difference somewhere, to do things that you could look back on and say, ‘I helped make that happen,’ like the Mosaic, and just making the internet a broadly usable place to get things done. So it was just the opportunity to be able to do that. I mean, I quite frankly laughed a little bit when you first asked the question, because I also came here and I remember one of the first couple of meetings, first couple of days, and I sat down with a group of people, and I said, ‘Look, let me tell you what other people think about you. (Both of us laugh) They think you’re arrogant, that you don’t play well with others, that you’re bright as heck, and you can get all kinds of things done, but you need to kind of tone it down a bit, and be better partners and collaborators, and people would like to see that happen.’ So that was my impression coming here; that it was a great place for opportunities to do things, but it was also a place where we needed to kind of change our culture a little bit.

K: Understandable. So when you finally did come here, what were your expectations for the position exactly?

D: This position’s pretty broad. NCSA gets involved in so many different things, and has such a range of skillsets, and disciplines, and groups that it works with, and to have such a depth of experience and expertise, it’s a beautiful place to work. It’s a place where, like I said before, most of the people, like I, wanted to come here because they wanted to have an opportunity to change the world. It’s a place where most of the people here, I think are here for the same reason. They came here because they thought this was a place they thought they had a change to change the world, so coming here, my expectations…I’m not really sure what my expectations were. I think I was just scared, because I was dealing with such terrifically qualified people who had been so successful at doing things, that it was scary that I was now going to be in a position to where I was going to be expected to help move them to the next level. And the next level from where they were, was like holy cow where might that be!? So, my expectation was trying to figure out how I might be able to help make that happen, but I was scared, it was a scary thing.

K: Completely understandable. So you said earlier, that you had, before here, worked at Rice (University). What was your position at Rice University?

D: We had a national center, called Center for Research and Parallel Computations, CRPC, and we broke a lot of new ground there. It was one of those large, academic centers. I was hired there, because I came from a business background, rather than a scientific background, and the guy there, by the name of Ken Kennedy, very well known, since passed on, but a very well-known researcher in his own right, realized that he wanted somebody who would run things in a more business-like manner, rather than an academic manner. So we set up processes, and procedure, and project management controls and systems, while trying to do that in an academic setting, so that you give people the flexibility and the freedom to be able to reach and make mistakes and test out new ideas, but still just try to put a little structure into the whole thing. It really worked out very well there, and that’s what attracted NCSA to me as well. It’s funny, because the equivalent center, San Diego Supercomputing Center, was offering me the same exact job, at the same exact time, and it was right when the 9/11 activities happened. So here I was, here 9/11 happens and I’m talking to both, so it was in that timeframe.

K: What made you choose between here and San Diego?

D: Well it wasn’t the regional environment (laughs). It turns out I would’ve made the choice in the regional environment, because here is a great place to raise a family, and just have a healthy perspective on things, much more than in California. But it was really the fact that the people here at NCSA were more grounded, and more working together as a unit, and in San Diego there were more individual groups kind of sidelined from each other. I choose here at Illinois, because I really felt like this was a place where the group of people working together could get more things done. So it wasn’t about the money, it wasn’t about the environment, although it would’ve been nice to be on the California coast doing all this, but it was really about the people and the opportunity to make a change.

K: Speaking of change, you obviously know the 30th anniversary is going to be this year.

D: Oh yeah, absolutely! Well it’s really I’m excited because, you know in the Midwest people put their head down, they get their work done, their work ethic here is really good, and NCSA has been really successful at getting a lot of things done, but we haven’t promoted ourselves, and marketed ourselves. So what am I excited about? I’m not excited that there’s nothing magical about the 30th year that we’re going to do anything more special this year than we did last year. We expect to keep doing really nice, really great things, but this year we have an opportunity to use the 30th year anniversary as an opportunity to promote ourselves, maybe to people to get them to pay more attention to what we’ve been able to get done in the past, and what we’re set up and planning to do going forward. So just getting different groups, like the communities that we work with, the agencies that we work with. There’s this community down here, (to get them to) understand what we do, just to get them all to understand more what our capabilities are, what our plans, our hopes, and our dreams really are, and hopefully look to us more as the group that they really want to partner with to try to move forward. So to help try to get that message across, is I think what having a big splash on the 30th anniversary really gives us a chance to do. Really let people know what we’ve done and get that idea.

D: (Laughs). Well there’s quite a few actually. One was something that I really didn’t have that much to do with, and it was the creation of Mosaic, which happened before I came. But after I came, very shortly after I came, all the sudden, we were doing a 10 year anniversary of the original, initial creation of Mosaic, and at the time we were doing it, like now, you look around and you go, ‘Wow…it’s everywhere,’. Your three year old kids are using it, your grandmothers are using it, your friends, your cousins, your uncles, I mean everybody’s using it. And they’re using it to do trillions of dollars’ worth of transactions, they’re using it to gather information about medical ills and aches, and understand things, knowledge transfer. It’s just amazing how much a part of our life it is, and just to think how far we’ve come in a 10 year period, because of that one technology, and where are we going to be 10 years from now? The phone has got as much power now, as the old supercomputers used to have back in those days, right? And now we’re talking to our phone, and we’re doing things that we used to see in Buck Rodgers and all kinds of things on TV back then, and these things are coming true. I mean people are just thinking of what they’d like to be to do with technology, and they’re figuring out how to do it! We’re just moving so fast and so far, and it made an impression on me how fast this world is moving; the technology in this world is moving along. And NCSA is a place where that kind of stuff can happen.

K: That’s all in the first 30 years, so what can you imagine, can you even understand what might happen in the next 30 years?

D: I’m not even sure I can understand what might happen (we both laugh), but you’re going to be wearing clothes that are going to be connected to the internet, connected to everything. It’s going to be a ubiquitous world, things are just going to be all connected. You’ll speak into your computers much more easily, than what we do right now, the censors that will be out there, just monitoring what foods you’re buying, what temperature your refrigerator’s at, what you’re consuming, what you have left, helping you manage your food supply at your house, helping you manage your garden, helping you manage your health. You can imagine some censors that will be gathering information about your health, and the work we hope to be doing soon with the Mayo clinic on individualized medicine is going to go far in that direction. They’re looking at that as maybe a 10 year project, to really get it to where doctors and hospitals everywhere will be making use of individualized medicine. The information we’re gathering from your genome, your DNA, from monitoring things on a regular basis will be able to much more effectively reduce the time people spend being ill, and reduce deaths, and just improve the health of our society by leaps and bounds. That’s really a fascinating area, I wish I could give you a better description of that, but it’s going to be a whole phase change in how we do medicine and public health in our countries around here. So where are we going to be 10 years from now…it’s going to be fun to wait and see where it’s going to be, but it’s going to be a part of everything we do.

K: Thank you very much. It’s been a very enlightening experience and a great interview.