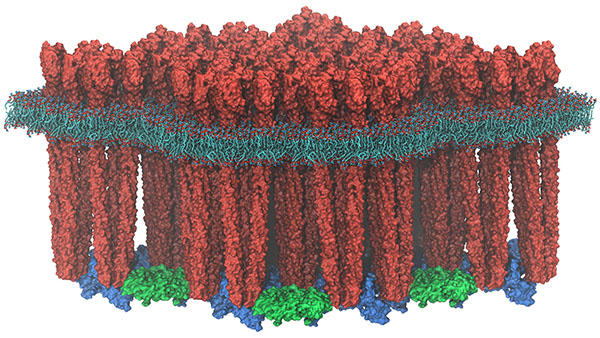 A new study led by research from University of Illinois physics professor Klaus Schulten offers atomic-level details of the molecular machinery that allows swimming bacteria to sense their environment and change direction when needed.

The receptors on the surface of a bacterial cell detect light, chemicals, edible things and poisonous things, and transmit that information to a deeper layer of proteins, called kinases, which interpret this data and translate it into a simple choice: “Keep going” or “Change direction!”

To resolve the picture of the chemosensory array, Schulten and his colleagues used molecular dynamic flexible fitting, a computer modeling approach Schulten’s lab developed at Illinois. MDFF simulates the chemical interactions of every atom in a system and makes use of what is known about the structure from EM, crystallography and other experimental data. Such large-scale modeling and simulation requires the heft of a supercomputer, and for this effort the team used Blue Waters at the National Center for Supercomputing Applications at the U. of I.

The new study revealed key chemical interactions between the proteins that make up the chemosensory array, and offered new insights into the behavior of these proteins. For example, it revealed for the first time that one region of a kinase called CheA, changes its orientation in relation to the other proteins, in a motion the researchers call “dipping.” Further experiments revealed that this part of the kinase is essential to the process that allows a bacterium to respond to its environment and change direction.