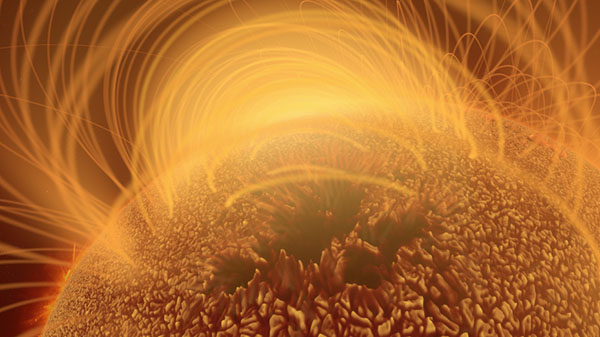 A 24-minute, high-resolution science documentary about the dynamics of the Sun that features data-driven visualizations produced by the National Center for Supercomputing Applications (NCSA) at the University of Illinois at Urbana-Champaign will debut June 30 at the Louisiana Art & Science Museum in Baton Rouge before rolling out to more than a dozen planetariums and science centers around the world.

“Solar Superstorms” was produced as part of a project called CADENS (Centrality of Advanced Digitally Enabled Science). Supported by a grant from the National Science Foundation, CADENS spotlights the new knowledge produced thanks to the massive computing and data analysis capabilities now available to scientists, engineers, and scholars. In addition to NCSA’s Advanced Visualization Laboratory (AVL), led by Donna Cox, the CADENS team includes Spitz Creative Media, Thomas Lucas Productions, and the leaders of the NSF-supported Blue Waters and XSEDE projects, which enable thousands of people across the country to carry out computational and data-driven research.

To tell this story, AVL visualized data from researchers across the country who use digital tools to understand solar phenomena. For example, Homa Karimabadi, Mahidhar Tatineni and Vadim Roytershteyn of the University of California, San Diego, used NCSA’s Blue Waters supercomputer to simulate a solar wind interacting with Earth’s magnetic field during a powerful solar storm. Data from the team’s numerical simulations were visualized by AVL, creating a dramatic view of the resulting turbulent front. Such large disturbances can result in loss of communication satellites and blackouts.

Robert Stein, Michigan State University, used Pleiades to simulate the solar dynamo in the rapidly circulating gas in the outermost 2 percent of the sun. It is from this layer that bundles of magnetic flux can emerge from the Sun’s surface, being visible as sunspots, and can drive the solar flares and coronal mass ejections that produce the dangerous storms in Earth’s space weather. Pat Moran, NASA Ames, calculated magnetic field lines from Stein’s simulations, which AVL visualized.

Matthias Rempel, NCAR, used the Kraken system at the National Institute for Computational sciences to simulate a patch of the Sun’s surface covered with “granulation”—the continent-sized convection cells carrying heat to the surface—and following in detail the formation of sunspots.

Yuhong Fan, NCAR, used NCAR’s Yellowstone supercomputer and the Discover supercomputer at NASA’s Center for Climate Simulation to simulate the region in the solar corona—above the Sun’s surface—as magnetic fields anchored in the body of the sun become increasingly strained and then suddenly release stored energy as the field reconnects, launching first one and then a second coronal mass ejection into space.

John Wise, Georgia Tech, used Blue Waters to simulate the early universe (from ~20 million to 500 million years after the Big Bang), showing the formation of the first generations of stars as their light ionizes much of the space around them. For the visualizations in the documentary, three features were targeted: the dense filaments along which stars form; the large regions of gas that become ionized and heated as new stars begin emitting lots of ultraviolet light, and later cool off after those stars’ lives end; and the heavier elements mixed into the gas after those dying stars explode as supernovae, forming small bubbles of high “metallicity density.” A second supernova simulation examines the life and death of a single first-generation star, looking in detail at the processes that mixes the heavy elements into their environment.