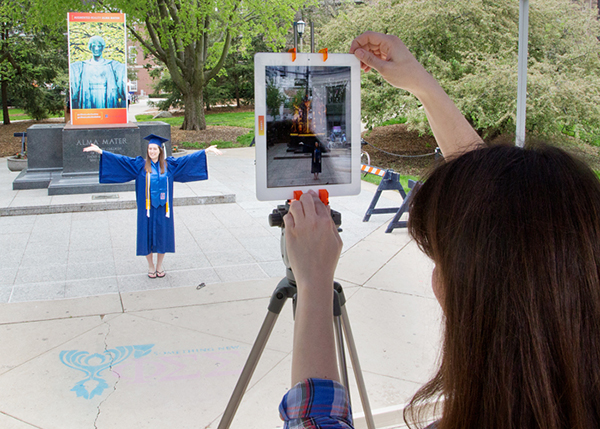 Commencement is a time rich in both tradition and anticipation for the future. Although a vital icon of tradition at the University of Illinois at Urbana-Champaign, the Alma Mater sculpture, is absent in body, she is present in spirit—and in pixel.

The bronze Alma Mater sculpture is one of the most recognizable and beloved symbols of the campus. At 13 feet tall, Alma herself stands with arms outstretched as the figures of Learning and Labor clasp hands behind her. It has been a campus icon since its dedication in 1929. Students have lined up to take a picture with the sculpture in their caps and gowns for decades as an intrinsic rite of graduation.

The sculpture was removed from its pedestal on Aug. 7, 2012, for conservation work after decades of deterioration as a result of exposure to the elements. Many members of the Illinois community, especially students, were disappointed that she would not be present to preside over commencement.

Artists and programmers across campus came together to create the app, made possible by the three-dimensional scanning and modeling capabilities at the Beckman Institute for Advanced Science and Technology, computing power at the National Center for Supercomputing Applications (NCSA), research at the Institute for Computing in Humanities, Arts and Social Science (I-CHASS), and community collaboration with the Champaign-Urbana Community Fab Lab.

The app uses NCSA’s augmented reality technology to digitally impose the Alma Mater model within the real-world scene. A poster depicting the Alma Mater’s face sits on the sculpture’s pedestal near the Illini Union. The app recognizes the poster and responds by displaying the high-resolution, three-dimensional model, using specific reference points in the image to determine the location and perspective of the computer-generated sculpture. A graduate can walk up next to the platform and appear to be standing next to the sculpture.

“It’s magic,” said computer scientist Bob McGrath, who retired from NCSA in 2012 and came back to work on the Alma Mater AR app. “These graphics are exactly what you see in video games or in movies, except that we’re projecting it onto the scene from the real world. So what you see is this computer graphics generated object imposed on the world in the place that it’s supposed to be.”

This is the first time an augmented reality object of this type has been rendered at such a large scale in an outdoor setting. The effort to bring the Alma Mater home for commencement demonstrated a strength at the core of the U. of I. identity: collaboration across multiple areas of expertise to create something technically advanced and meaningful to the community. The project involved researchers, ironworkers, graphic designers, communicators, students, imaging specialists, conservators, administrators and others working together under a tight deadline.

Building the model began with a high-resolution surface scan of the sculpture at the Conservation of Sculpture and Objects Studio in Forest Park, Ill., to create a digital duplicate in painstaking detail. Travis Ross, the manager of the Visualization Laboratory at Beckman, then faced the challenge of taking the 2 billion points of data from the scan and creating a simplified model that could be processed by a mobile device in real time, while retaining the high-resolution detail in its appearance. Meanwhile, Craig and McGrath worked to build the application, collaborating with graphic designers in campus Public Affairs and metalworkers in Facilities and Services to create the target that the app would recognize.