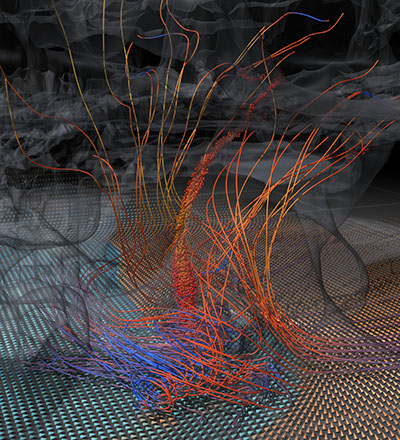 The PBS TV series ‘NOVA’ focused on the search for understanding nature’s most violent tornadoes, from daredevil storm chasing in tornado alley to simulating severe weather with the computational resources and visualization expertise of NCSA at the University of Illinois at Urbana-Champaign.

“Hunt for the Supertwister,” produced by Thomas Lucas Productions, Inc. for NOVA and partially funded by Intel Corporation, was aired nationally on PBS stations across the country. The show featured data-driven tornado visualizations produced by NCSA’s Experimental Technologies Division.

In an effort to pinpoint what triggers tornadoes, researchers create computer simulations of evolving storms. Just as physicians use X-rays and CAT scans to diagnose disease, storm researchers use simulations and visualization to analyze tornado formation.

“The big problem in storm science is that with the instrumentation we have we can’t sense all the things that we need to know,” explains Lou Wicker, a researcher at the NOAA National Severe Storms Laboratory in Oklahoma. “From the field, we can’t figure out completely what’s going on, but we think the computer model is a reasonable approximation of what’s going on, and with the model we can capture the entire story.”

Wicker developed a model called NCOMMAS (NSSL Collaborative Model for Multiscale Atmospheric Simulation) to computationally simulate thunderstorms and their associated tornadoes. NCOMMAS is based upon an earlier model developed by Robert Wilhelmson, NCSA research scientist and University of Illinois professor of atmospheric sciences.

Wilhelmson’s research team used NCOMMAS to simulate a supertwister similar to the one whose 200 mph winds ripped through tiny Manchester, South Dakota, in the summer of 2003.

Starting with the recorded pre-storm conditions near Manchester, the simulation followed the erupting thunderstorm and resulting powerful tornado as it evolved in a 100 x 100 x 25 km domain. The calculations were performed on NCSA’s IBM p690 computing cluster. To simulate about two and a half hours of “cloud time” required the use of 16 processors for 10 days.

The simulation produced 650 billion bytes of data. These snapshots of the evolving storm consist of wind temperature, humidity, and precipitation data at various intervals.

To render the images for NOVA, the group used a visualization cluster composed of 40 dual-processor 2.4 GHz Intel Xeon nodes, each with 2GB of RAM and about 100 gigabytes of local disk space, plus seven I/O nodes, each with about 290GB of shared disk space each. The group actually produced many times more footage than is actually seen in the NOVA episode, and the work required about 970 dual-processor-CPU-days.