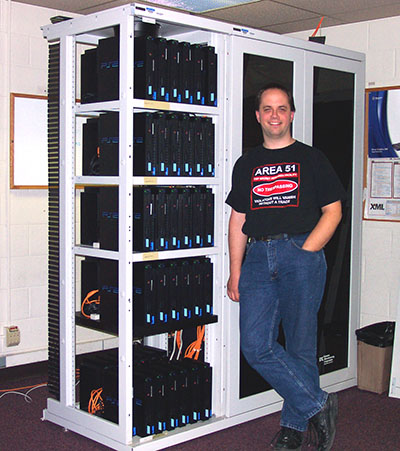 When Sony released its PlayStation2 (PS2) game console in 2000, demand far outstripped supply, with eager gamers and desperate parents bidding up to $1,000 on eBay for scarce units. When Sony later released the Linux Kit for the PS2, interest in the machines spread beyond the gaming community to a seemingly unlikely place: NCSA. Researchers at NCSA theorized that because of the unique processor of the PS2—with its two powerful vector units designed to manipulate polygons for game displays—a cluster of the consoles could potentially be used for scientific computation.

In 2003, NCSA’s researchers clustered 70 PlayStation2 consoles into a supercomputer. As the New York Times’ John Markoff said in an article on the cluster, “Perhaps the most striking aspect of the project, which uses the open source Linux operating system, is that the only hardware engineering involved was placing 70 of the individual game machines in a rack and plugging them together with a high-speed Hewlett-Packard network switch.”

“It took a lot of time because you have to cut all of these things out of the plastic packaging,” NCSA’s Craig Steffen told the paper.

Some of the tools commonly found on more tradition high-performance computing clusters were integrated into the system, including the Message Passing Interface, which allows the individual consoles to communicate with each other and execute application across all of the machines simultaneously, and the Portable Batch System and Maui Scheduler, which manage jobs on cluster systems.

It was only a short time before useful quantum chromodynamics calculations were running on the system. Though the system was short-lived and was always more a test of what was possible than an attempt to build a production system, its influence was significant.

“If you look at the economics of game platforms and the power of computing on toys, this is a long-term market trend and computing trend,” Dan Reed, former NCSA director, said in the Times article.