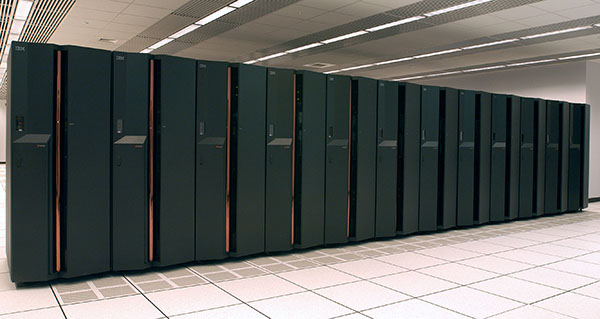 The POWER4 p690 consists of 384 1.3 GHz processors with a total of 1.5 terabytes of memory. It replaces NCSA’s 1,512-processor SGI Origin2000 array, which has a peak performance of 660 gigaflops and 614 gigabytes of total memory. The POWER4 is a Shared Memory MultiProcessor (SMP) system, making it particularly valuable for running applications with very large memory requirements, including engineering and chemistry codes and a large number of commercial codes. The system is the newest computing resource of the National Computational Science Alliance, one of the partnerships of the
National Science Foundation’s Partnerships for Advanced Computational Infrastructure (PACI) program. It is also the largest SMP resource available through the PACI program.