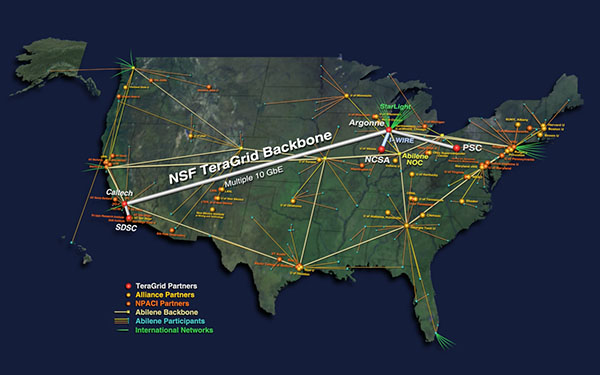 This extended TeraGrid environment will provide the national research community with more than 20 teraflops of computing power distributed among the five sites and nearly 1 petabyte (1 quadrillion bytes) of storage capacity.

The award also ensures that the TeraGrid will be extensible and ready for expansion in the future. Additional sites will be able to connect to the TeraGrid, and the national research community will be able to take advantage of its high-performance resources.

“This expansion of the TeraGrid will provide computing power to scientists that is orders of magnitude beyond anything we’ve ever seen before,” said Dan Reed, director of NCSA and chief architect for the TeraGrid project. “In addition, it will provide the best high-resolution visualization environments, more storage capacity than ever before possible, and access to grid computing toolkits and grid-enabled applications. The impact on scientific discovery will be significant. At this point, we can’t even begin to imagine the discoveries that the TeraGrid will make possible.”

Each of the five sites play a specific role in the TeraGrid project: