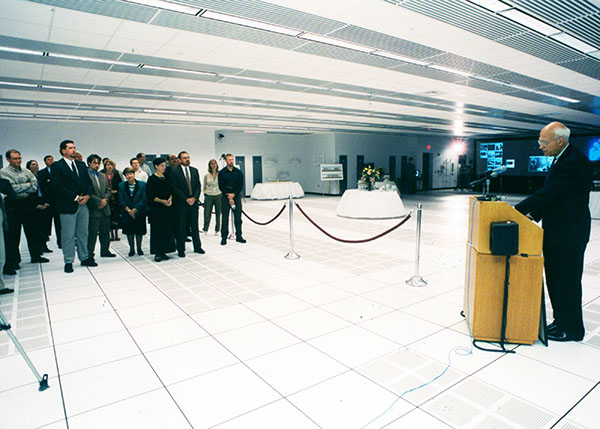 On Wednesday, Sept. 5, more than 500 people came to ACB on the U of I campus to officially open the two-story, 18,029-square-foot addition to the building, dedicate NCSA’s first Itanium-based Linux cluster, and celebrate the beginning of the TeraGrid project.

NCSA Director Dan Reed, University of Illinois President James Stukel, Gadi Singer of Intel, David Turek of IBM, Wes Kaplow of Qwest, and Tom Garritano of the NSF spoke to reporters shortly before the dinner event. Other activities before the dinner included tours of the addition, demonstrations on a high-resolution tiled display wall, and an Access Grid demonstration that brought in participants at Argonne, Boston University, University of Kansas, the Ohio Supercomputing Center, and the ACCESS center near Washington D.C.

The ACB addition increases computer room space at the building to nearly 16,500 square feet. The addition includes 750 tons of cooling capacity and a five-foot-10-inch deep access floor below the computer room for airflow, conduit, wiring and cable trays. The current terascale computers in the facility require more than seven miles of wiring to connect the computers. The TeraGrid systems will require an additional 10 miles of wiring.