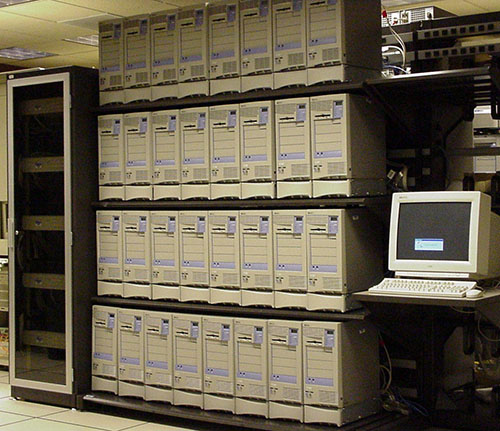 In 1998, Andrew Chien, then a professor in the University of Illinois Department of Computer Science and a member of the Alliance Parallel Computing Team, and his research group worked with staff from NCSA to construct a 256-processor Windows NT supercluster for high-performance computing research. The supercluster consisted of 32 Compaq and 96 Hewlett Packard Windows NT PC workstations. These 128 workstations, connected by a Myrinet network, used Chien’s Illinois Fast Messages middleware to create a powerful 256-processor supercluster.

ZEUS-MP, a computational fluid dynamics code written by the Illinois Laboratory for Computational Astrophysics and used for simulations of astrophysical phenomena, was up and running on the system less than six weeks after the systems were delivered.

The supercluster was among the first of its kind and helped define the concept of off-the-shelf cluster computing. Though Linux is now the OS of choice for most of such systems, this concept has become overwhelmingly popular and is still used in the largest of centers and the smallest of research labs.