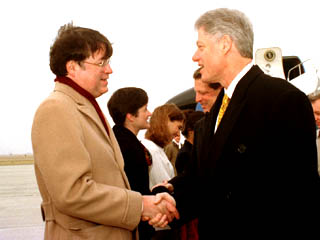 On the morning after delivering a State of the Union message that emphasized the importance of education, President Clinton spoke to a packed house at the University of Illinois Assembly Hall on the Urbana-Champaign campus. The President emphasized the important roles the University and NCSA have played in technology development. He twice mentioned the work of NCSA Director Larry Smarr, who is a member of the President’s Advisory Committee on High Performance Computing and Communications, Information, Technology and the Next Generation Internet.

The World Wide Web, through the leadership of NCSA and the University, “has grown from the private reserve of physicists to something most 8-year-olds know more about than their parents,” said Clinton. He acknowledged that the University and NCSA would play a major role in developing the information infrastructure of the 21st century.

“We’re trying to develop the Next Generation Internet, and Larry Smarr is helping us,” he said. Clinton went on to praise the National Science Foundation, and pledged continued support for NSF and the scientific research it supports.

Clinton’s talk was preceded by a rousing speech from Vice President Al Gore, who called the University “the central cloverleaf for the information superhighway.” Gore also highlighted the work of NCSA and the University of Illinois, saying anybody who surfs the Internet owes a debt of gratitude to the creators of NCSA Mosaic, the first graphical Web browser.