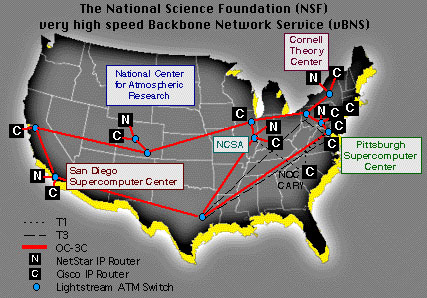 NSF named NCSA as Distributed Applications Support Team (DAST) for the National Laboratory for Applied Networking Research (NLANR), a distributed laboratory with staff at all of NSF’s supercomputer centers. As such, an NCSA team helped users of the vBNS maximize the performance of their applications and solved network problems. In addition, the team maintained information including links about vBNS applications, and provided training to network and applications engineers.

The applications being prototyped on the vBNS give researchers the ability to run simulations on the largest-scale high-performance computers available—such as the 512-processor SGI/CRAY Origin 2000 system at NCSA—and pump the data back to their local site for immediate visualization. Before there was a vBNS and applications to take advantage of its capabilities, this type of long-distance research would have required writing data to tape and then shipping it to the local site for visualization.