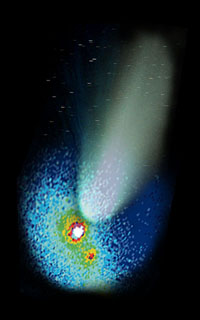 Thanks to a system from NCSA for rapidly processing radio wavelength images from the BIMA Array radio telescope, astronomers tracing the path of Comet Hale-Bopp proclaimed their 1997 observations of the comet as some of their most successful ever. The comet passed within about 125 million miles of Earth in March and April of that year.

Astronomers from the nine universities that field tested the new data processing system from NCSA said the combination of high-speed computers, high-speed networks, and parallel software brought an immediacy to their observations of Comet Hale-Bopp never before possible. The near real-time data processing system was developed by NCSA’s Radio Astronomy Imaging group. One of the tools transported raw data from the telescope to an archive at NCSA within seconds after it was generated. A second tool rapidly processed the data on the center’s high-speed, multiprocessor computers. Research programmer Ray Plate connected the two tools so that data from the archive could be transferred across a fast link to supercomputers. A third software tool from NCSA called AipsView transformed the data into images.

By slashing the usual delay between the time observations are taken with a radio telescope and the data are processed on a supercomputer into images, the system enabled the team to study images from each day’s observations on the same day the data were collected. Consequently, they could more efficiently plan each subsequent day in their critical but brief observing period and coordinate their observations with astronomy teams worldwide.

Observing “blind” can be crippling when following fast-moving comets. “Comets change at short intervals. And there are so many decisions to make,” said Lewis Snyder, an astronomy professor at the University of Illinois. “Which molecules do we observe as they sublime off the nucleus? Do we look at HCO+ or HCN? Should other telescopes be made aware that HCN is undergoing an outbursts?” Without timely feedback, astronomers may devote three days to a spectra (the usual wait for observational data to be processed), only to discover that they should have been concentrating elsewhere.