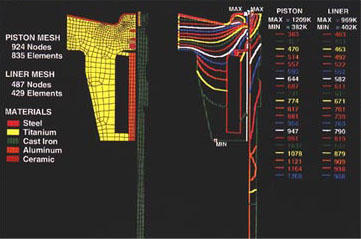 It’s a common quandary for automobile manufacturers: Clean air laws require reductions in pollutants and increases in fuel efficiency, while market pressures push for new designs on faster timelines. Dennis Assanis, from the University of Illinois at Urbana-Champaign’s mechanical and industrial engineering department, performed pioneering work modeling turbulent flows in vehicle engines throughout the mid-1990s on NCSA’s high-performance computers. The goal was a “numerical engine” that would allow manufacturers to test new engine components on computers before creating expensive prototypes. Assanis spent part of a sabbatical traveling to major manufacturers worldwide in order to tailor these efforts to the particular challenges faced by the automotive industry instead of simply creating a generic fluid dynamics code that designers would have to shoehorn their work into.

Much of his work was on improving one of the most powerful multidimensional engine simulation code at the time, KIVA-3, which was developed at Los Alamos National Laboratory and is still in use today. Unlike its predecessor, KIVA-3 handled both intake and exhaust flows, simulating entire combustion cycles. Assanis’ embellishments included better predictions of the behavior of fuel droplets and expanding the code to allow for the direct injection of natural gas into the fuel chamber. His work was also significant in porting the code to massively parallel processing systems. These systems were just coming into vogue at the time but are now widely used.