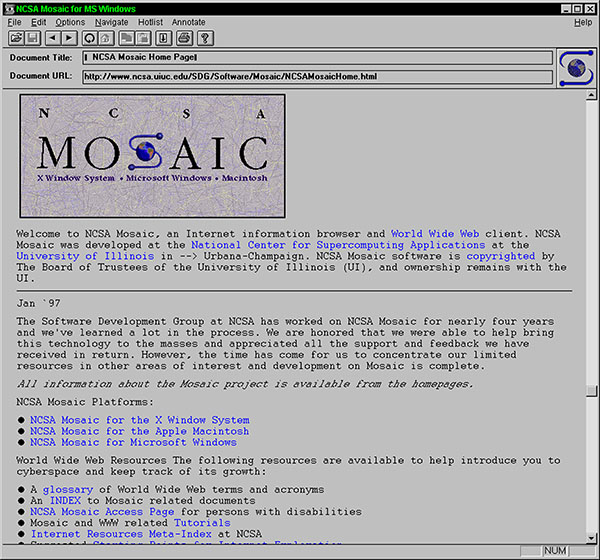 People had created Web browsers before. In fact Tim Berners-Lee, who first conceived of the World Wide Web while working at CERN, built a rudimentary one himself in 1990. Prior to anyone at NCSA putting down a line of code, researchers in Palo Alto and Berkeley and Helsinki were circulating their own versions, frequently with melodious names like Viola and Cello.

NCSA Mosaic broke out in a way that no previous browser had even begun to. It stood on the shoulders of giant ideas and became a giant in its own right.

“[T]he initial version of Mosaic drew on the innovations of earlier browsers, which already included many of the features aimed at making the software easy and appealing for non-geeks, features that would later become staples of the genre, such as icon buttons (back, forward, home), bookmarks…and a variety of attractive fonts and typefaces,” said an article in GQ. This is how big things had become by early 1997—exposés were appearing in men’s magazines.

“To be sure, Mosaic deserves credit for tackling two problems. First, earlier browsers were troublesome to get up and running, while Mosaic was a lot easier, thanks largely to [NCSA developer Eric] Bina’s programming skill. Second, Mosaic was the first published browser that automatically displayed pictures along with text, as in the pages of a magazine layout or an illustrated book. That was important because later on it would be the proliferation of pretty pictures that transformed that Web from the domain of scientists and hackers to a cultural phenomenon that captured the interest of the masses.”

As NCSA’s Mike Folk later described it for this history, “We said to ourselves, ‘Hey, these [other browsers] don’t do pictures. We’re all about pictures [with software like NCSA DataScope and NCSA Image]. We can do better than this.'”

NCSA’s focus on tools that were friendly to use and solved straightforward but untouched problems shine through as it had with earlier software projects like NCSA Telnet. “We were used to taking other people’s stuff and making it better. It’s what we did,” Folk said.

The intensity of that focus didn’t hurt either. “Marc [Andreessen, an NCSA student who also worked on the project and would go on to serve, for a time, as one of the Web’s primary poster boys] maintained a near-constant presence on the newsgroups discussing the Web, listening for features people were asking for, what would make the browsers easier to use. He would program these into the nascent browser and keep publishing new releases o other could try it. He listened intently to critiques…Marc was not so much interested in just making the program work as in having his browser used by as many people as possible. This was, of course, what the Web needed,” Berners-Lee said in his book “Weaving the Web.”

By the time Mosaic landed on the cover of the New York Times business section in December 1993, more than 5,000 copies of the browser were being downloaded a month and the center was receiving hundreds of thousands of email inquiries a week. The article touted that “Mosaic’s many passionate proponents hail it as the first ‘killer app’ of network computing—an applications program so different and so obviously useful that it can create a new industry from scratch.”