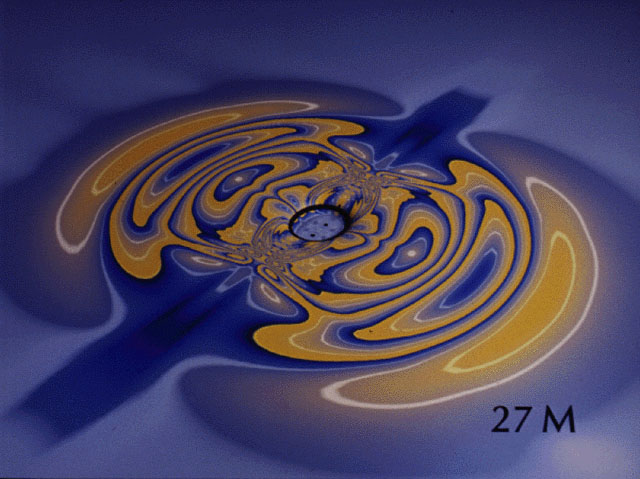 As funding and construction of the National Science Foundation’s Laser Interferometric Gravitational Wave Observatories got under way, NCSA researchers were already hard at work, defining the gravitational wave signatures that LIGO would pick up. These observatories, now complete, are among the most sensitive instruments in the world, able to detect variations in the Earth’s gravitational field.

Cataclysmic astrophysical events—exploding supernovae or colliding black holes, say—are thought to send detectable gravitational wave disturbances rippling through space. These ripples eventually pass Earth, and each type of event should have a unique signature. Simulations of those events provide a catalog of wave signatures that help LIGO researchers recognize and understand the sources of the detected waves.

“The waves respond to the bulk motion of a large amount of mass,” explained former NCSA research scientist and now-director Ed Seidel. “The coherent bulk motion of two stars coalescing or of a nonspherical supernova blowing up will yield a wave form that is the only indicator of what the sum of that mass is doing. Currently nothing provides us with information about this big picture. Electromagnetic radiation comes from a small local unit like a molecule, but the gravitational wave comes from the global mass.”