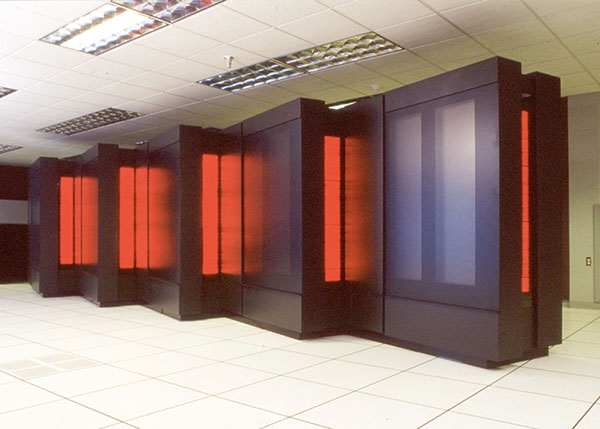 A radical Thinking Machines Corporation (TMC) redesign, the CM-5 employed off-the-shelf SPARC
processors with four 64-bit vector units added on. It was the first large scale “massively parallel” computing system to be employed by the National Science Foundation MetaCenter project and was one of the most popular systems for running some of most computationally intensive Grand Challenge computations.

The CM-5 was a message-passing, distributed memory, massively parallel machine, and was well-suited for problems that can be broken into many pieces to be worked on simultaneously. It had 512 nodes and 16 GB of memory, which provided a peak speed of 64 gigaflops (billions of floating point operations per second). Users of the CM-5 enjoyed sustained speeds on their codes 200 times faster than on the Cray Y-MP system.

The distribution of projects by discipline on NCSA’s CM-5 showed a broad interest in scalable systems across NSF scientific directorates. In contrast to earlier platforms at NCSA, one-third of the projects were computer science research projects. These projects have enabled and empowered researchers in other disciplines because their findings have provided advanced and optimized
algorithms suited to scalable architecture. This response was quite different from the early Cray usage at NCSA when less than 1% of users were computer scientists.

The age of scalable computing has begun. Success stories were coming in so fast that print media was supplemented to keep NCSA’s users abreast of breaking developments. For this reason, a CM-5 User Group was formed. Called the International Connection Machine User Group (ICMUG) it utilized NCSA
Mosaic to bring together CM-5 sites worldwide.