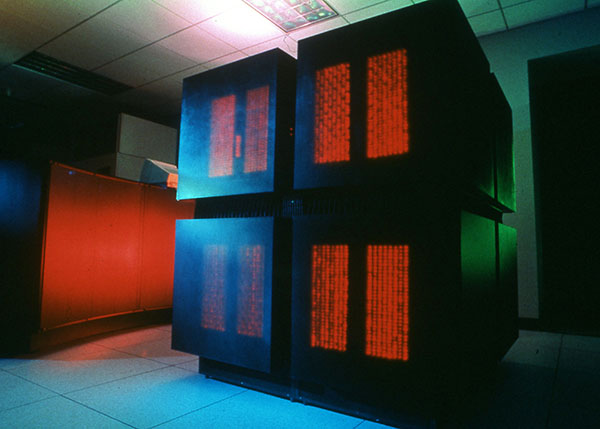 Though the center was begun with a straightforward mission to provide computing time to the nation’s scientists and engineers, innovative new systems have always been on the machine room floor, too. “We try to build a ladder where we have both rock solid persistent resources and machines that are experimental,” said Michael Welge, who has been at NCSA since the last 1980s and is now the data division’s associate director.

In 1989, the system that users were most interested in getting a look at was the Connection Machines’ CM-2. After being shuttled from NASA to the Defense Advanced Research Projects Agency, Jim Bottum, NCSA’s deputy director at the time, made contact with an Air Force major. He explained who he was and what the center was about and asked for the opportunity to discuss getting time for NCSA’s interested users.

“I got back a—I don’t know how many words this is—an email that just said, ’10 AM, Tuesday,'” Bottum said. He began meeting with DARPA officials. “We never put in any proposals. We never did anything except talk.” In the summer of that year, to everyone’s surprise, “Our operations manager, Mike Smith, called and said, ‘There’s a truck backing up to the Advanced Computation Building, and we don’t know what’s on it.'”

The truck held a CM-2, not-so-fresh from a site in Texas that hadn’t been able to get much good out of it. “It’s sitting out in this truck in the 100 degree heat with a power cable slung over the top of it like somebody’s moving a TV set. I think a couple of the front-end machines had tire marks on them like they’d been run into with a forklift,” said Welge. But they were happy to see it, nonetheless. “We’d been working hard to get one, and then it just appeared.”

“It was a tough machine to use,” Welge said, but it marked the center’s first foray into massively parallel computing, a concept that defines much of high-performance computing to this day. At the height of its popularity, the CM-2 had more than 200 users, a “huge number for an experimental machine like that,” he said.

When it was decommissioned, “We didn’t know what to do with it,” according to Bottum. “We didn’t have any paperwork on it. We didn’t really have ownership. But it had been tremendously used. We got a lot of good science done on it.”

Eventually the center decided to give the machine to Nathan Merville, head of Microsoft Research at the time. “He paid for the shipping,” Bottum said. “We were told that Danny Hillis, creator of the Connection Machine, had to come to boot it up for him in his house.”