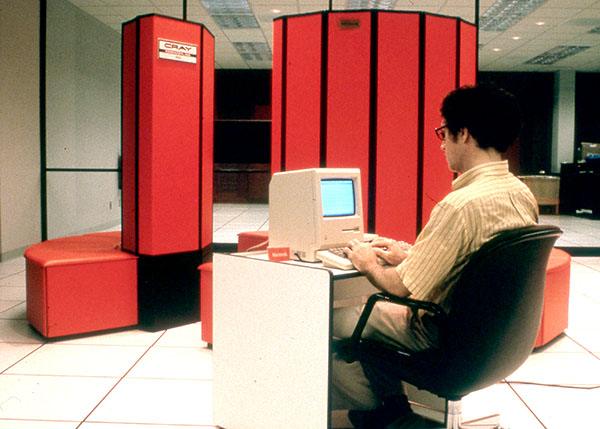 Around the halls of NCSA, he was affectionately referred to as “The Sponge.” University of Illinois physics professor John Kogut, who had been one of the co-principal investigators on the initial proposal for a supercomputer center, was willing to sop up any unused computing cycles.

“John Kogut and his group used half of the original supercomputer,” explained Larry Smarr, NCSA’s first director. “It was a two-processor Cray X-MP, and one of the processors Kogut was able to keep busy doing quantum chromodynamics calculations, basically 24/7.

“We have a wonderful picture of John on a very early Macintosh, and it had a little wire going over to the Cray sitting there. That became the metaphor for NCSA…We knew people came from a PC or a Macintosh, across a network, to the supercomputer. That was not the mode [at the Department of Energy’s national labs]. This was a radical departure, and it was happening just as the PC world was being born.”