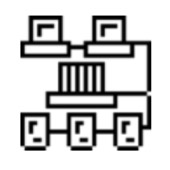 The way researchers–and everyday people–use computational resources is often as important as the resources themselves. “NCSA had a workstation support group since well before I got here,” said Mike Folk, who has been at the center since 1988. “Workstation support means updating your virus check program now. At the time, though, it meant helping the scientists at the local level. It was a very big part of what we did.”

Users were logging in from off-site machines through a cobbled-together system that included a cooperative network established by U.S. universities called BITNET, the fledgling NSFNET, and even direct phone connections to the supercomputers’ front-ends via a 1-800 number. Just as significantly, they were starting to use personal computers to do so. They needed a straightforward way of working from the distant computers.

NCSA Telnet was the center’s first major software release. Ultimately, there were many pieces of software based on the telnet protocol, which allowed users to log in to other computers via the Internet and issue commands and run programs on those host machines. NCSA Telnet, however, was among the first and most popular (in part because of its integrated file transfer capability). By 1991, in an era when there were dramatically fewer people on the Net, the application had more than 100,000 users.

“We were more known for Telnet than anything else through the early 1990s,” explained Tim Krauskopf, one of the first grad students hired at NCSA in late 1985. “Any academic researcher using a Mac had to have it.” Krauskopf would later be part of the team that formed Spyglass, which would commercialize NCSA Image and DataScope and be the University of Illinois’ commercial partner in the release of NCSA Mosaic.